Larry sticks around for another week

After a break from local footy for the Chatham Cup the lads looked to refocus on the DG. Following our draw in Gore we held a slender one point advantage over Thistle so a win over QP was crucial to keep the momentum going. Unfortunately, it was a horror week of weather with rain and wind every day. This meant a bad training week as man flu crept in to the ranks.

After a good dosing of rain in the morning just to ensure slippery conditions and with a cross wind blowing cold from the west we kicked off. It was always going to be about who wanted it most and which team could get the early goals. Play started fairly end to end with both keepers called into action and anything in the air next to impossible to control.

Old Boys perhaps adapted quickest and were finding some gaps in the Park backline. While in our defensive end Hamish succumbed to a calf strain picked up the week before. He was replaced by Rushy who answered the SOS this week with Danny sidelined following his hand ball suspension. 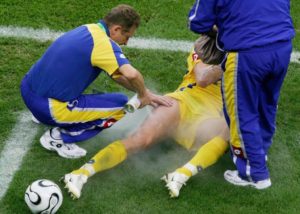 Kyle was first on the scoresheet as he dribbled his way through to take on the keeper. A calm finish in the corner was a boost to everyone. Kyle was also linking up well with Kurt Knarston on debut following a multi-year hiatus form the game. And Kurt wasn’t to be outdone with his own mazey effort through the backline and calmly slotting his 1:1 effort.

Two nil at the break and the message was composure and to continue winning the key battles. Frank O’Boyle fresh off the homeland tour was ready and rearing to get into the action. The second half saw us create several good chances especially moving down the right side where Joel was using the wind to his advantage as he terrorised his young marker. Unfortunately, the finishing wasn’t quite there to match.

With the match winding down, we finally scored from a corner when Andrew dove in front of his marker at the near post to win a header which powered into the bottom corner. An excellent return for him in his second run of the campaign.

In the end a deserved win where the score line probably flattered the opposition. In the other match Gore and Thistle drew one all meaning we hold a four-point lead ahead of our match with Thistle to finish Round 2 and get us to the halfway point of the campaign.

This game got exciting....

How much fergie time?

Reply on TwitterRetweet on TwitterLike on TwitterTwitter
Load More...